Kareena Kapoor Khan celebrated the festival of Diwali with pomp. The actress wore a red color suit during this time, while Saif Ali Khan and his two little princes Taimur and Jeh were seen in black color kurta-pajamas.

The actress also shared some family photos on Instagram, but everyone’s eyes were on Jeh’s antics. In this photo, Jeh is seen crying and lying on the ground. Seeing these actions of the little Nawab, users are making funny comments that even the children of celebrities do such acts.

Users gave amazing reactions on this picture of Jeh. One user has written, this is the real firecracker of Diwali, while another wrote, ‘After marriage this is the story of every couple.

Another user wrote, ‘Oh my God, their children also do such things?’ Seeing this picture of Kareena’s son, most middle class users are seeing their belonging in it. 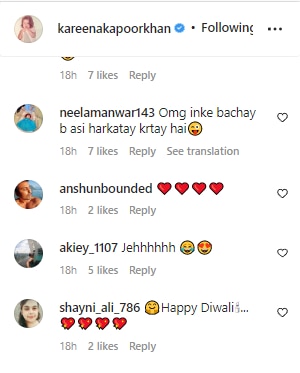 Another user has written, ‘It is normal that he is crying. The children of our right-handers make a spectacle. This is normal. Kareena gave birth to Jeh Ali Khan on 21 February 2021. Kareena affectionately calls Jeh as Tim. In the picture, Kareena’s elder son Taimur is seen smiling at the antics of the younger brother.

Also read- Aila Bhatt, who herself became a mother, wished mother Soni Razdan on her birthday in a special way, said- ‘I felt deeply now…’

This oil can add beauty to beauty, use it like this

What was going through your mind in the last over? Hardik’s funny answer to Jadeja’s question

May the happiness of Diwali not fade away, take care of the new born baby like this

Anil Kapoor does not see himself as ‘Nana’, daughter Sonam shares funny reaction of actor

Nora Fatehi’s desi look before Diwali, see these pictures from the sets of ‘Jhalak Dikhhla Jaa’

Android users will have the experience of iPhone 14, now Android will also get satellite calling feature